Ice extracted from asteroids or lunar craters will not be competitive with fuel launched from Earth on reusable rockets costing fifty thousand dollars. This should concern us.

15 tons of high quality fuels trucked from sophisticated refineries in Houston then launched for $250,000 on Falcon 9s in Brownsvile will always outcompete expensive fuels cracked from water-ice extracted out of lunar craters using as of yet non-existent multi-billion dollar technologies. In fact, the ability to launch tons of fuels from Earth to LEO on reusable rockets may delay the development of in-space resource utilization for decades.

When Musk achieves reusable rockets, development of all near Earth resources may be delayed from any cislunar source – even unfortunately asteroids with their superior concentrations of ore and favorable zero g environment. This ironically however provides a reason for taxpayer support of asteroid retrieval: private/public research partnerships teleoperating on an asteroid in Earth orbit owned by all U.S. citizens (NASA) could jump-start technologies humanity will need to develop asteroids. Humanity needs access to asteroids long-term. Asteroids – not the moon – will fuel a billion-fold increase in our industrial base. Despite a huge disparity in initial cost-competition with launches from Earth, government subsidized R&D on asteroids placed in an elliptical orbit around Earth could advance for-profit Free World leadership of in-space resource utilization by decades.

As we celebrate the 45th anniversary of the Apollo 11 moon landing, our space program finds itself adrift. But this need not be so. The great deeds we accomplished then demonstrate what we can do when we are brave. The time is overdue for America to commit itself to a bold new venture in space: the human exploration and settlement of Mars.

We’re ready. Despite the greater distance to Mars, we are much better prepared today to send humans to Mars than we were to launch humans to the moon in 1961 when President John F. Kennedy challenged the nation to achieve that goal. Given the will, we could have our first teams on Mars within 10 years.

$20 billion is not a trivial sum, but over 10 years it would represent about 12 percent of NASA’s budget, or less than 0.4 percent of the U.S. military budget. It’s a sum that this country can easily afford.

But why do it? There are three reasons.

1) For the Knowledge: Our robotic probes have shown that Mars was once a warm and wet planet that could have evolved and supported life. If this possibility could be confirmed by actual finds of fossils on the Martian surface, it would show that the origin of life is not unique to the Earth, and thus by implication reveal a universe that is filled with life and probably intelligence as well. From the point of view of humanity learning its true place in the universe, this would be the most important scientific enlightenment since Copernicus.

Now, robotic probes can help out in such a search, but by themselves are completely insufficient. Fossil hunting requires the ability to travel long distances through unimproved terrain, to climb steep slopes, to do heavy work and delicate work, and to exercise very subtle forms of perception and on-the-spot intuition. All of these skills are far beyond the abilities of robotic rovers. No, field paleontology requires human explorers, real live rockhounds on the scene.

2) For the Challenge: Nations, like people, thrive on challenge and decay without it. The space program itself needs a challenge. Consider: Between 1961 and 1973, under the impetus of the moon race, NASA produced a hundred times the rate of technological innovation it has shown since, for an average budget in real dollars only about 20 percent more than today. Why? Because it had a goal that made its reach exceed its grasp. You don’t need to develop anything new if you are not doing anything new. Far from being a waste of money, forcing NASA to take on the challenge of Mars is the key to giving the nation a real technological return for its space dollar.

A bold humans-to-Mars program would also be an challenge to every kid in the country: “Learn your science and you can become part of pioneering a new world.” There will be over 100 million kids in our nation’s schools over the next 10 years. If a Mars program were to inspire just an extra 1 percent of them to scientific educations, the net result would be 1 million more scientists, engineers, inventors, medical researchers and doctors, making innovations that create new industries, finding new medical cures, strengthening national defense, and increasing national income to an extent that dwarfs the expenditures of the Mars program.

3) For the Future: Mars is not just a scientific curiosity, it is a world with a surface area equal to all the continents of Earth combined, possessing all the elements that are needed to support not only life, but technological civilization. As hostile as it may seem, the only thing standing between Mars and habitability is the need to develop a certain amount of Red Planet know-how. This can and will be done by those who go there first to explore.

Mars is the New World. Someday millions of people will live there. What language will they speak? What values and traditions will they cherish, to spread from there as humanity continues to move out into the solar system and beyond? When they look back on our time, will any of our other actions compare in value to what we do today to bring their society into being?

Today, we have the opportunity to be the founders, the parents and shapers of a new and dynamic branch of the human family, and by so doing, put our stamp upon the future. It is a privilege not to be disdained lightly.

Reaction Engines Ltd: “The Troy mission concept arises from a feasibility study, performed to confirm the capability of the SKYLON launch vehicles does enable large human exploration mission to the planets.

The Troy mission is envisaged to be performed in two parts – an unmanned, precursor mission, and the later manned mission. Using SKYLON, the elements for the Troy ships are delivered to an Orbital Base Station, where the components are assembled. These components are designed to fit into the SKYLON payload bay, and have as much commonality as possible. The Precursor Ships comprise an Earth Departure Stage, a Mars Transfer Stage, three large Landing Modules, (one carrying rovers, one carrying power and propellant production plant, and one carrying an accommodation module), and a Ferry Vehicle for the journey to and from Mars orbit to the surface. Transit time to Mars would be 264 days, and on arrival, the three landing modules would be deployed to land at a pre-selected site, forming a base. Three Precursor Ships would be sent, forming three bases on Mars which would enable the rovers to reach more than 90% of the Martian surface.

The Earth Departure stages of the Precursor Ships would not achieve escape velocity, and would return to the vicinity of the Orbital Base Station after a period of 50 days, where they could be recovered and re-used in the Manned Ships. These Manned Ships would also comprise a Mars Transfer Stages, an Earth Return Stage, crew accommodation modules, and capsules for the return to Earth orbit. These ships would be despatched at the next launch opportunity, and take 251 days to reach Mars. On their arrival, they would dock with the waiting Precursor Ships and the crew transfer to the Ferry vehicles for the trip to the Martian surface, where they would land at the pre-prepared bases.The crews, each comprising 6 members, would spend 14 months exploring the Martian surface, making extensive use of the rovers.

Atmospheric processors at each of the three bases would collect gases, separating and storing them for use by the explorers and to provide propellant for the ferry vehicles.

At the end of the exploration phase, the crews would use the Ferry vehicles to leave the surface and dock with the orbiting missions ships, and from there begin the journey home. Once in the vicinity of the Earth, the return capsules would separate and perform an aerobraking manoeuvre in order to slow down to the point where they could dock with waiting SKYLONs for return to earth.”

“The idea of a one way mission, that, you know, you go to Mars, spend two years there, then have a suicide pill – or you go there at age 65 live for twenty years and then check out – no. That is not attractive. But what is very attractive is the idea of the “Normandy Beach Approach” – which is, you go to Mars, one way, not with the intent of dying there – but with the intent of living there. You take the beach. You send, you send people there not with the intent of abandoning there but with the intent of joining them there with more people more equipment more supplies more of everything. You back them up and you take the planet. And, um, that’s the proper concept for a one way mission – and if you’re prepared to do that, then that is the most efficient mission by far.” 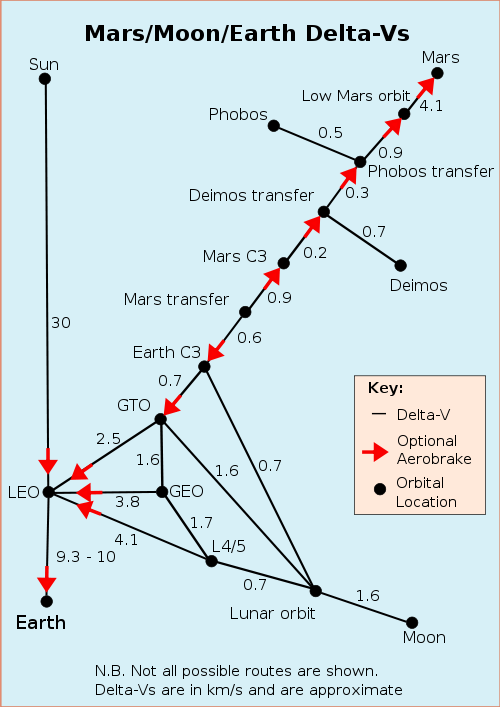 .@inspirationmars Dennis Tito walks over to poster that says “Humans to Mars in 2030” and says I cannot wait until then.#H2M
— NASA Watch (@NASAWatch) May 8, 2013 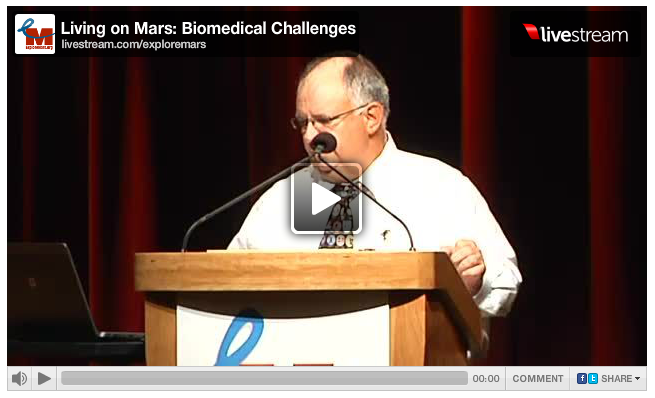 Additional videos will be posted as they are archived here:
Livestream.com/ExploreMars

“Its whiter than a republican convention up here” notes one audience member. How to expand inclusiveness? #H2M
— NASA Watch (@NASAWatch) May 8, 2013 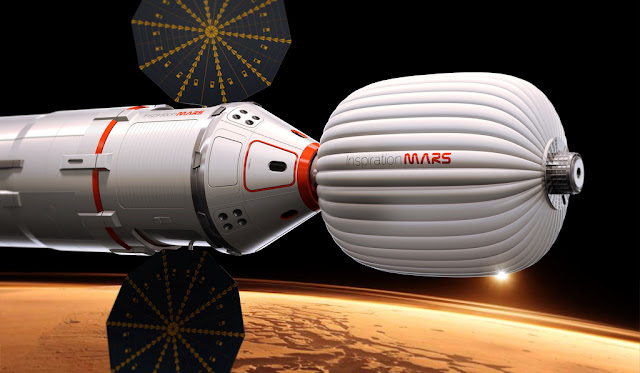 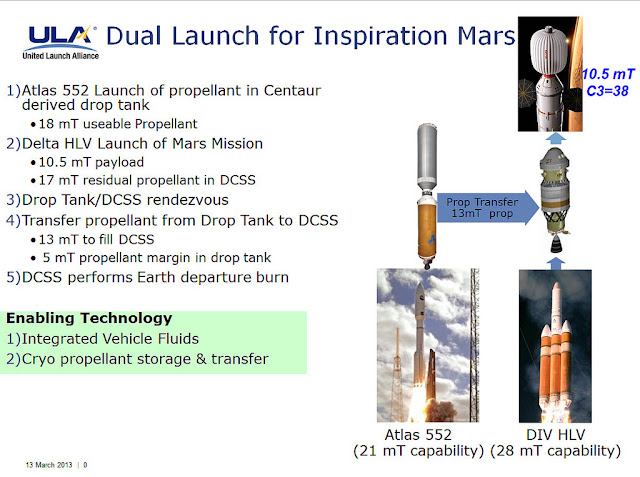 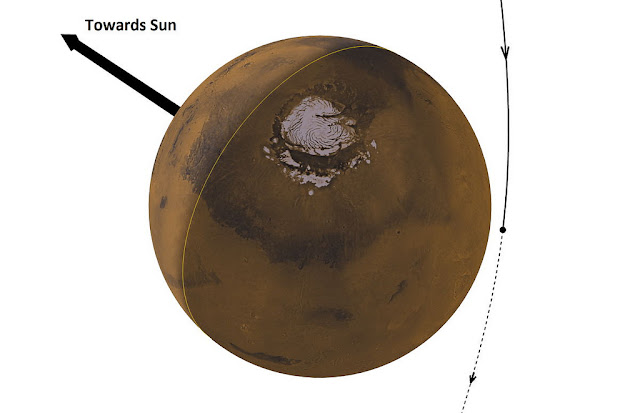 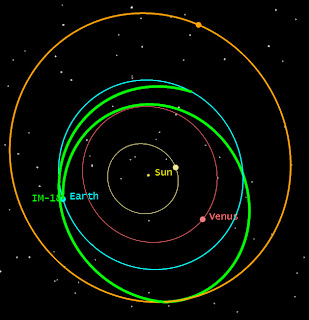 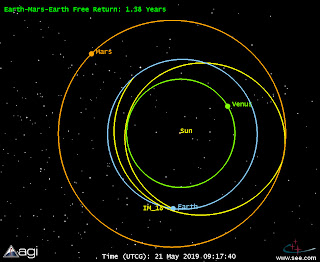 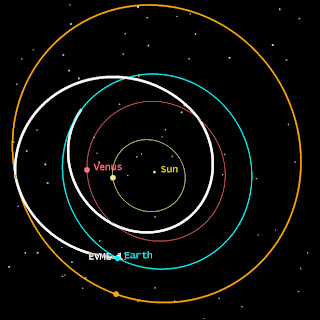 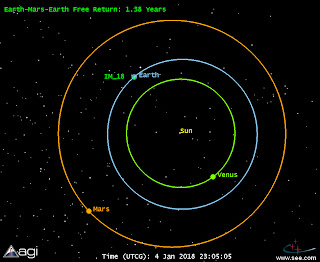 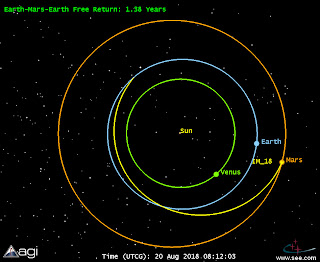 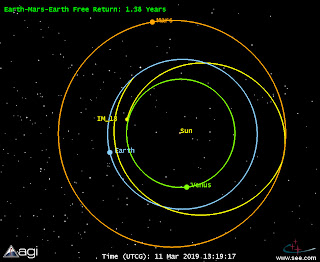 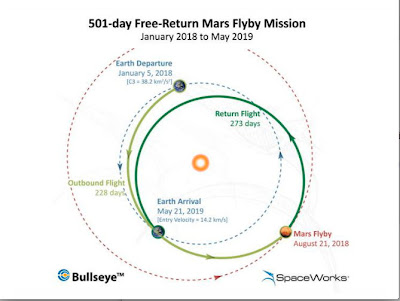 Inspiration Mars Trajectory VDF file
You will need the free STK Viewer App, from AGI to view the file. You can also view it directly in STK. 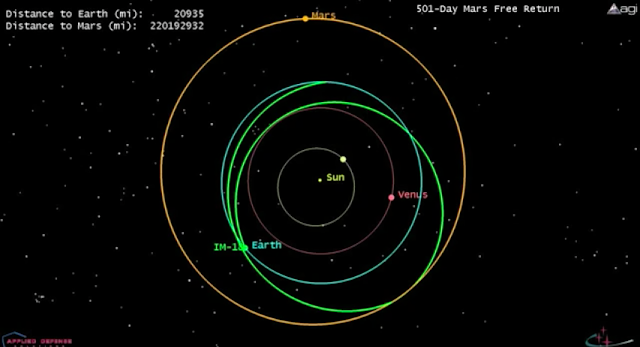 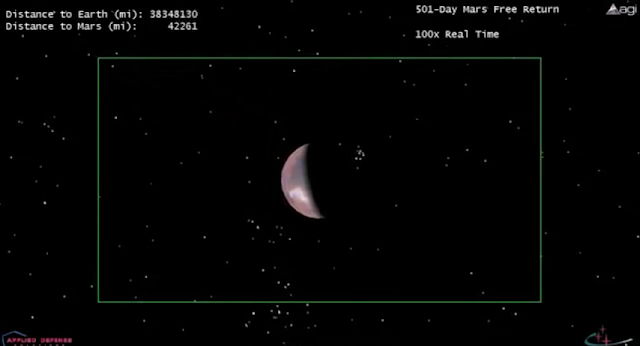 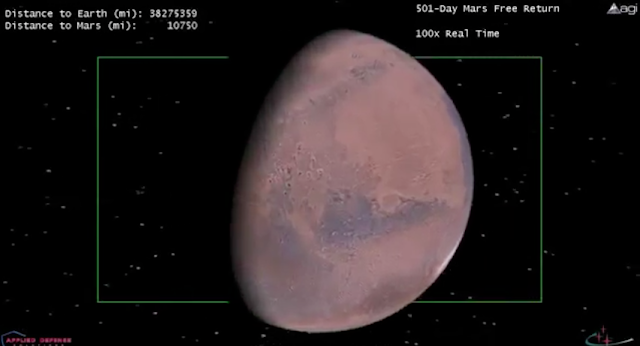 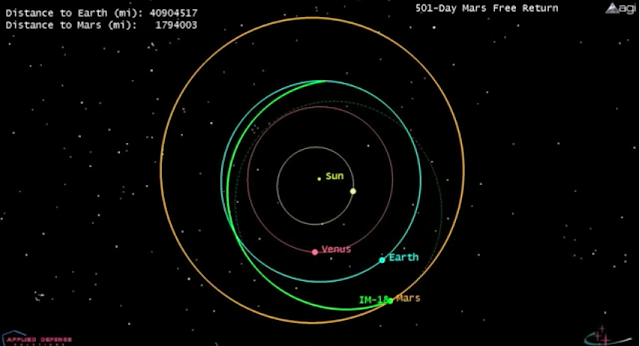