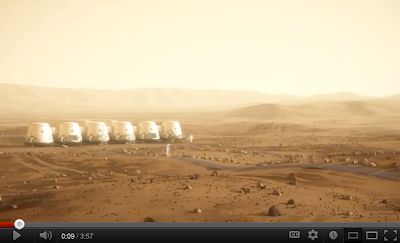 The MarsOne Project wants to send astronauts on a one-way trip to Mars by 2023. Mars One does have something going for it: a Mars to Stay philosophy and a definite and achievable to-do list:
1. Send a communications satellite to Mars in 2016, a rover in 2018 to find the best location for a settlement, and in 2020 send infrastructure for settlers to live in, including solar panels. September 14, 2022 Mars One launches its first four astronauts and ten months later in 2023, they arrive to live in habs previously established on the planet’s surface by robots.
2. Every two years, another group of settlers will make the one-way Mars to Stay.
3. Chronicle the entire project in a format not unlike a reality television series (the project has already received backing from Paul Römer, a co-founder and executive producer of the show Big Brother).
Mars One plans to send another couple of adventurous astronauts to join the colony every two years, but the idea is that no one gets a return journey. This is a permanent base, a Plymouth Rock in an entirely new world that will begin the long, slow and painstaking process of terraforming it.
http://Mars-One.com
Just a note: the first three missions (communications sat, rover, infrastructure) could be collapsed into one. Three couples rather than four persons should be sent…and…there’s no way any amount of television advertising alone will ever pay for it. Also, a nuclear reactor ought to be included for safety. This group generated a tremendous amount of press by having a “nobel scientist” attached, a decent clear video, and a professional website. (All of which could have been made by one person for under 5k, but, it looks good and is Mars to Stay.) Good luck!
Yet another Mars Settlement biz plan…here are a few faults:

1) please do not use the word ‘colony’ ever; ‘settlement’ and ‘settlers’ are preferable

3) “Our initial [settlers] may be people beyond childbearing years.” this concedes too much…initial settlers should be young couples looking forward to starting families if early experiments with small mammal births prove fine

4) “The [settler] selection process will ensure that we select individuals who will bring needed skills and thrive under Mars conditions.” Ugh. This will select people similar to those in charge of the selection process. Would you want to spend the rest of your life with such folks – or, would you rather hang out and work with people disdainful of “selection processes” – characters like Hawkeye and Honeycutt from the Swamp in M*A*S*H? : )

This entire project should take place as a breakout session during the Mars Society’s Annual Conference, but, in any case good luck…