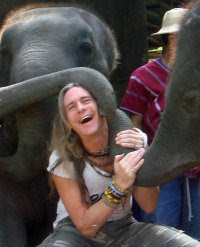 Carter Emmart is human, check out his Facebook profile picture. Looks like a fun guy climbing out on his monkey tree. Most of us don’t bother to climb, content to spend our lives waiting for permission even to live. As a space advocate with his own understanding of ‘professional,’ Dr. Emmart has become a legendary figure in the space advocacy community: no one has been more influential in promoting humans to Mars through art than Carter Emmart.

An original founder of the Mars Underground while at the University of Colorado, Carter Emmart has been Director of Astrovisualization at NYC’s Hayden Planetarium since the late 1990s. He has collaborated with visualization teams from the National Center for Supercomputing Applications and the San Diego Supercomputer Center.

The American Natural History Museum’s full dome space shows are now playing in world wide distribution. Emmart, who previously worked at NASA Ames Research Center and the National Center for Atmospheric Research, received his BA in geophysics from the University of Colorado where he was an organizer of the Case for Mars Conference series.

Realistic. Near-term. Human. If you are interested in Mars you have almost certainly seen his definitive, archetypical drawings. Created before CG — black and white, in pencil — they still inspire like no others. Their informed, educational, scientifically literate themes set a standard in Mars Art to which all Mars Artists in any medium aspire. 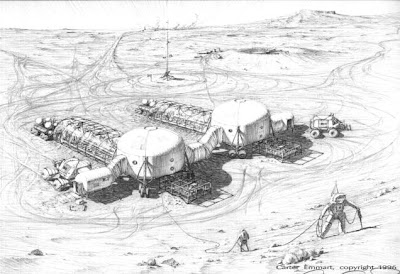 The above artwork is from the book, “Strategies for Mars: A Guide to Human Exploration”, a textbook on the issues associated with the human settlement of Mars. Edited by Carol Stoker (NASA Ames Research Center) and Carter Emmart (then at the National Center for Atmospheric Reseach), this ground-breaking text draws together twenty-six individually authored chapters by noted authorities in fields considered crucial for understanding human settlement of Mars. 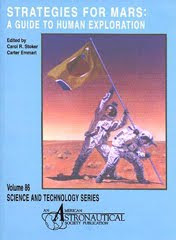 This book was originally suggested as an idea by the former Thomas O. Paine, NASA administrator from 1968-1970, and Chairman of the National Commission on Space, 1986. He died in 1992, leaving as his last work, a chapter for this book. His design for the Mars flag is shown on the cover being raised by his grandson.

Directed by Carter Emmart, Journey to the Stars is an engrossing, immersive theater experience created by the American Natural History Museum’s astrophysicists, scientific visualization, and media production experts with the cooperation of the National Aeronautics and Space Administration (NASA) and more than 40 leading scientists from the United States and abroad.

Featuring extraordinary images from telescopes on the ground and in space and stunning, never-before-seen visualizations of physics-based simulations, the dazzling new Journey to the Stars launches visitors through space and time to experience the life and death of the stars in our night sky, including our own nurturing Sun. Tour familiar stellar formations, explore new celestial mysteries, and discover the fascinating, unfolding story that connects us all to the stars. Those who come along for the journey may never see the night sky in the same way again.

Journey to the Stars, narrated by Academy Award-winning actress Whoopi Goldberg, premiered on July 4, 2009, in the Hayden Planetarium at the Frederick Phineas and Sandra Priest Rose Center for Earth and Space. More information may be found here: http://www.amnh.org/rose/spaceshow/journey/

On your personal computer, straight from the Haden, you can also begin a personal expedition of our magical Galaxy, here: http://www.haydenplanetarium.org/universe/download/

And of course a collection of Carter Emmart’s original drawings may be viewed here: http://spot.colorado.edu/~marscase/emmart.html

A hundred years from now Martians living in a thriving vibrant human community will ask what motivated Mars settlement. Who wrote the pictures with a thousand words? Carter Emmart.