Congratulations Mike Neal! Easily the coolest design for any space-related event
in the last 10 years; exceptional artists by nature want to see humans on Mars. 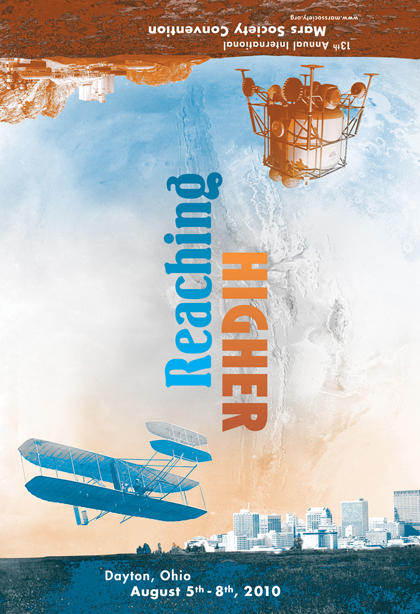 Mike Neal is a design and architectural writer currently completing his MFA at the School of Visual Arts in New York City as part of the inaugural class of its graduate design criticism program. He was born and raised in Southern California, where he worked for many years, first as a graphic designer, then as an art director for the Los Angeles office of the worldwide branding and advertising agency, Ogilvy and Mather.

As part of his critical studies, Mike has focused on examining the fields of space architecture. His graduate thesis deals specifically with the historical links to Modernist design theory in relation to current planning and design that would accompany the first human explorers to Mars. For first hand research Mike served as the journalist and executive officer for the Mars Society’s 84th crew at MDRS.

The concept for Mike’s design for the Society’s upcoming convention was initially inspired by a quote by architect and designer, Buckminster Fuller, who decades ago had tried to pioneer a design/science revolution. Always a challenger of the status quo, Fuller was particularly scrutinizing of the language we use to describe our universe; he once noted, “If you still use the terms up and down, you’re still thinking in terms from the dark ages.” Fuller argued instead there was only “in”, towards the Earth’s gravitational center, and “out,” towards space.

This idea is translated in the convention poster in the constantly shifting perception of orientation of both space and time. Up and down—in and out—are in a state of flux between the gravitational centers of blue Earth and vermillion Mars, as ground and sky interchange. The conventions theme also changes though maintaining its intent; “Reaching Higher,” as the Wright brother’s did in their first flight, and continuing on that trajectory to the “Higher Reaching” goal of Mars.