.
James Cameron personally attended the International Mars Society Conference in 1999. He delivered the Keynote Address then spent the entire weekend moving from panel to panel with his camera crew, sitting in the audience alongside other attendees while taking extensive notes on a yellow legal pad with a ball point pen. That was before laptops and only a year and a half after the release of his record blockbuster “Titanic.” It was a bold dramatic meaningful appearance which said: I care about Humans-to-Mars; I want to get this right. For the next two years he continued to send teams of videographers to record every presentation. Then, two purely idiotic movies were released — “Red Planet,” “Mission to Mars” — and Cameron wisely decided to shelve his project until the cultural debris settled. Periodically interviewers will ask, “What about Mars?” The most important consistent reply he provides with confidence is: “I have done the research. I know Mars. When the time is right it will happen.” 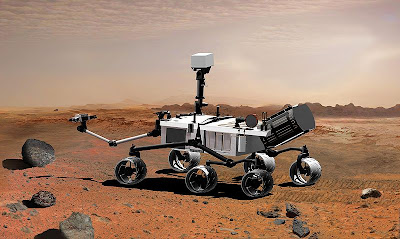 James Cameron has not only laid the foundation for making one of the most important films about Mars in our generation, for a time he even sat on NASA’s Advisory Council – a panel of experts and advisers appointed by the agency’s administrator. He remains on the science team for the 2011 Mars Science Laboratory. The Mars Science Laboratory, known as Curiosity, is a NASA rover scheduled to be launched between October and December of 2011. One can only hope this window of opportunity is not corrupted by competition from less informed directors, once again.
“I’ve been very interested in the Humans to Mars movement—the ‘Mars Underground’—and I’ve done a tremendous amount of personal research for a novel, a miniseries, and a 3-D film.”
These very rough drafts of Mars mission equipment were created by Digital Domain nearly ten years ago to accompany Cameron’s Keynote Address. Although they were of high-quality for CG at that time, he nevertheless apologized for not being able to bring final renders. The point of showing these images though was to demonstrate his support for Mars Direct and in particular humans to Mars; Cameron wanted to show fellow space enthusiasts he could be relied upon to “get the facts right” and — that this is important. (As an aside, during his keynote the name for Factual Fiction was conceived: if we could get the facts right a “New Mars” in the public’s imagination might lead to a rethinking of humans to Mars.)

“Exploration is not a luxury we can’t afford; it’s a necessity we can’t afford to lose. Pushing farther into the unknown is our greatest endeavor as a civilization and our deepest responsibility to future generations.” Near-term, realistic — without aliens, laser, or guns — someday James Cameron will change the way we think about Mars. No doubt there are many right now saying, “Come on Cameron!” 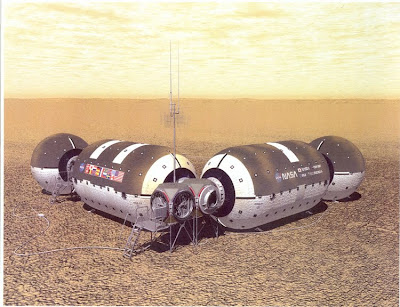 The follow are excerpts from his Mars Society keynote address:
.

“People are always saying … we need to solve our problems right here on Earth before we go spending money out in space. It makes me want to vomit frankly. [applause!].

Check back in five hundred or a thousand years. People will still be talking about all the problems that need to be solved. We are never going to reach some utopian plateau where everything is solved so we can then, with lordly confidence, look around us for worlds to conquer as some kind of hobby. Not spreading ourselves outward into the solar system now, when we have the capability to do so, is one of the problems we have to be solving right here on Earth. [more applause].

We are really at a turning point. Go forward, or go back. By stopping, by stagnating, we go back. I look around at the turn of the millennium and see a prosperous, powerful, technologically unparalleled society which, collectively, has no purpose but to feather its own nest. It is a goal-less, rudderless society, dedicated to increasing security and creature comforts. .

They are led to believe that heroism consists of throwing a football the furthest, getting the most hangtime during a slam dunk, or selling the most movie tickets with your looks and boyish charm. This is not heroism, and these are not valid tests of our mettle as an intelligent race.
.
Young kids need something to dream about, something to measure their value system against. They live in a sea of mind-numbing inputs, a point-and-shoot videogame world where it is hip to not care, where death and violence have no meaning, where leaders are morally bankrupt, and where the scientific quest for understanding is sooo not cool. Going to Mars is not a luxury we can’t afford … it is a necessity we can’t afford to be without.”

http://en.wikipedia.org/wiki/Mars_Science_Laboratory
http://www.space.com/sciencefiction/cameron_why_mars_825.html
MEN WANTED FOR HAZARDOUS JOURNEY. LOW WAGES, BITTER COLD,
LONG HOURS OF COMPLETE DARKNESS. SAFE RETURN DOUBTFUL.
HONOUR AND RECOGNITION IN EVENT OF SUCCESS.”
(ad attributed to Shackleton in London papers)
.
Bizarre lunar scientists — academics who have NEVER cut metal, much less designed human-rated missions — take it upon themselves to advocate “testing Marian hardware on the moon, first.” This is cowardly and unacceptable.
.
It is astonishing lunar scientists — some of whom actually refer to the moon as a “planet” — are quick to declare the utility of Martian ISRU “practice” on the moon, effectively misleading the public into thinking Lunar architectures are applicable to Martian missions.
Pause should be taken when funds for other NASA programs (such as far-side L2 radio telescopes and robotic missions to Europa) are squandered in this bizarre angle to the Mars/Moon debate; an entire Mars base can be chilled in vacuum chambers at Ames for 1/1,000th the cost of Mars simulation on the moon. This would be safer, provide greater testing opportunities, and release funding for many other beautiful endeavors NASA ought to pursue in addition to Martian settlement.
.
We will settle Mars and the rest of our solar system without lunar overhead, without lunar rovers, without lunar habs, lunar SBSP, lunar greenhouses, lunar life support, lunar recycling, lunar space elevators…or any lunar nonsense. Mars is the only location in our solar system with enough native resources to support a thriving society of initially ten to twenty, then tens of thousands, then finally hundreds of millions. (For Martian settlement there is no need to transport elements and basic resources from Earth as would need to be done for even mere lunar “research facilities”.)
.
Settlement of Mars will start when — and only when — human beings like us (you, friendly reader) decide humans must settle Mars. Not for profit, not for resources, not even for science — but to settle Mars. Permanently.
.
A lunar “colony” dependent upon the scientific literacy of an American president does not qualify humanity as spacefaring. The moon will never have a kindergarten, and, being only two days from Maui, will always be susceptible to abandonment and closure. Apart from a few bored and boring grad students dreaming of surfing on Earth, odd tourists out for a gosh and golly stroll, and robot repairpersons with family in Houston, humans will never return the moon. NEVER.
.
PROBLEMS WITH ‘MOON FIRST’ LIE IN THE PERSONALITIES OF MOON FIRST ADVOCATES
.
Personality infuses most engineering solutions. There ought to be a term for the personality component of engineering. Two engineers can reach the same goal but through different means, simply because of decisions which can only be ascribed to individual personalities. Engineers may even advocate slightly different goals attainable with the same tools, etc., for no other reason than ultimately their personalities. One engineer might be risk-adverse, another impatient with bureaucrats and overseers; one may favor small steps, another bold insightful leaps-of-confidence…each may even achieve the same results, possibly within the same cost and risk parameters, but, through very, very different means…reflective of their individual personalities.
.
For example, given the task of driving across the country “as soon as possible” two engineers might accomplish this in very different ways: one might map the trip by hand using a florescent highlighter, call ahead to make hotel reservations, even plan restaurant stops days in advance. He or she may create a multi-page itinerary in triplicate, backed up online, and programmed into an audio GPS device. All of course pre-approved by someone else. Another engineer might just toss some clothes, a laptop, and an iPhone in the car and take off — assuming gas stations and hotels will be there when needed. The first person takes three weeks to plan the trip, the other arrives in three days. No objectively quantifiable mathematical formulas are involved — each trip is almost entirely a reflection of personality. There ought to be useful, working terms to describe this phenomenon: an engineer’s own personal sense of adventure and courage affecting engineering solutions.
.
Psychology plays an especially important role in mission planning. Moon First advocates succumb to a 1950s fantasy of “If in Space then a Base.” This combines with “Closer is Safer” to create a vortex from which lowbrow unambitious academics seem unable to escape. Lunar advocates dismiss “Mars-In-My-Lifetime” as exhibiting an unwarranted sense of entitlement. Instead they are proud to conceive of Moon First missions as “realistic, pragmatic, small steps” not dependent upon “exciting” public support. Each side sincerely wants humanity to become a spacefaring species…”as soon as possible.” (Institutional and cultural inertia — such as job security and personal reputation — affects advocates on both sides.)
.
Those on the side of Mars First contend that a Mars mission must be conceived of as a Settlement Mission, from the start: with a 180 day transit there can be no “Flags and Footprints” mission to Mars. The end goal of settling Mars is not to engender public “excitement about space” but: to settle Mars. To go to Mars — we must go to Mars. Now.
.
Once we go, we should stay. As former Lunar Astronaut Buzz Aldrin — now a vocal Mars First advocate of “Mars to Stay” — has said, “They need to go there more with the psychology of knowing that you are a pioneering settler and you don’t look forward to going back home again after a couple a years. At age 30, they are given an opportunity. If they accept, then we train them, at age 35, we send them. At age 65, who knows what advances have taken place. They can retire there, or maybe we can bring them back.”
.
The full article may be read at Universe Today: http://www.universetoday.com/2008/10/23/aldrin-mars-pioneers-should-not-return-to-earth/ 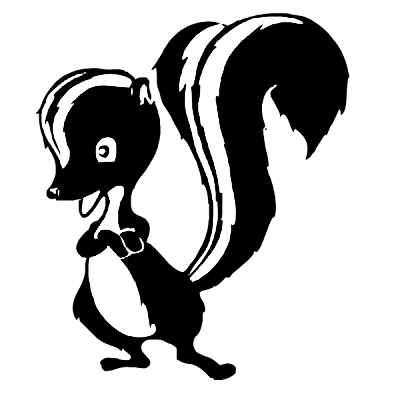 Kelly Johnson’s Skunk Works — Lockheed Martin’s Advanced Development Programs — was the most successful, intellectually ambitious, courageous team of engineers ever assembled. Kelly understood the psychological component of engineering solutions.
.
Unfortunately academia does not teach proactive alpha action — in fact, the type of people who are attracted to and thrive in academia are repulsed by alphas, afraid of action, and would much rather teach formulas and testable procedures than the Personality of Competence.
Fortunately Kelly wrote an autobiography to contextualize Skunk Works principles for posterity.
.

The basic operating rules of a Skunk Works are:

.
“The Skunk Works” wrote Kelly Johnson, “is a concentration of a few good people solving problems far in advance – and at a fraction of the cost – of other groups in the aircraft industry by applying the simplest, most straightforward methods possible to develop and produce new projects. All it is really is the application of common sense to some pretty tough problems.”
.
A PDF of Chapter 16 from Kelly’s autobiography — the section in which he writes explicitly about Skunk Works — may be downloaded here:
http://www.titlesequences.com/mac/resources/docs/lets_start_skunkin.pdf
.
Mars advocates are bored to tears with small-minded cowards telling them “if we were just less ambitious” we would already be (languishing) on the moon; or “if we didn’t try to get the public excited about space” we would recognize the small pragmatic steps necessary to become spacefaring as a species. There is NOTHING pragmatic about spending another fifty years and hundreds of billions of dollars going no where but LEO/Luna. Especially to satisfy the worries of those who succumb to lowbrow “If in Space then a closer base” fallacies.
.
THE MOON IS A SIREN’S CALL!