“In a brisk, engrossing account Engdahl traces the theories and speculations concerning the possibility of extraterrestrial intelligent life throughout history.” —ALA Booklist

“Engdahl has marshalled an impressive and fascinating selection of primary sources. . . . [She] has shown how deep this vein of speculation runs . . . and reminded us that our ancestors entertained a view of the universe that was larger and more imaginative than the history books lead us to believe. Challenging and original.” —Kirkus Reviews

“It’s commonly assumed that belief in other inhabited worlds, especially worlds in other solar systems, is a relatively modern idea, which didn’t become prevalent until the 20th century — many today even think it was originated by science fiction. But in fact, from the mid-17th century through 19th almost all educated people believed that the stars are suns surrounded by inhabited planets. This belief wasn’t seriously questioned until the late 19th century, and was out of favor with the majority only for a short period roughly corresponding to the time between World Wars I and II.”

“In the early 1970s, while doing research for my nonfiction book The Planet-Girded Suns, I collected quite a bit of poetry from earlier centuries that reveals what was thought about other planets. Much such poetry is by writers — many of them didactic writers — who are forgotten today, so a few stanzas by famous poets are often cited as if they were rare exceptions displaying prophetic vision.

Actually, these familiar ones are typical of the vast amount of such verse that appeared in popular publications of their day. In many cases I’ve seen only fragments of poems, quoted by scholars of literature; in others I’ve taken brief passages from long (sometimes book-length) works that are particularly relevant. This collection has been stashed away in my files for 30 years — I’m posting portions of it now in case others may find them as fascinating as I do.”

“Why do these views of the past about the universe matter today? Because, I think, they demonstrate that people have been aware of planets beyond Earth, and have been deeply attracted to them, for a very long time — long before travel between worlds was considered even a remote possibility. The desire for knowledge about them appears to be an instinctive human longing.” 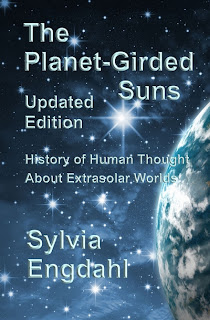 “In the 18th century, of course, it was assumed that there could never be actual contact with other worlds; but the people who believed in their existence couldn’t bear to think that nobody would ever find out more than could be learned through telescopes, and so they envisioned the souls of men like Newton — and eventually, their own souls — voyaging through space and seeing those worlds at close range on their way to Heaven. A great many poems were written on this theme; it was the first form in which space travel was seriously imagined by the public (stories of trips to the moon in that era, though popular, were either fantasy or satire on earthly affairs). People felt deep emotions about the idea. The late 19th and early 20th centuries, when literal belief in an afterlife declined, coincided with the time when belief in many inhabited solar systems began to fade. I’ve always felt that this was a kind of “sour grapes” response — or rather, a perhaps- comforting conclusion that there aren’t any grapes on vines beyond our reach. It’s significant that the conviction that millions of extrasolar planets exist didn’t become widespread again until radio astronomers began to have hope of receiving messages from them, and that as time passes without evidence of extraterrestrial intelligence, the pendulum seems to be swinging again toward theories that Earth may be unique.”

“In any case, a strong sense of our kinship with a vast inhabited universe has prevailed during most of the decades for the past 350 years, and these poems are evidence of its existence before the 20th century. Dozens of poets — and no doubt more whose works aren’t accessible, as well as those who wrote in languages other than English — referred briefly to planets circling other suns, usually in a religious context as evidence of God’s power.”