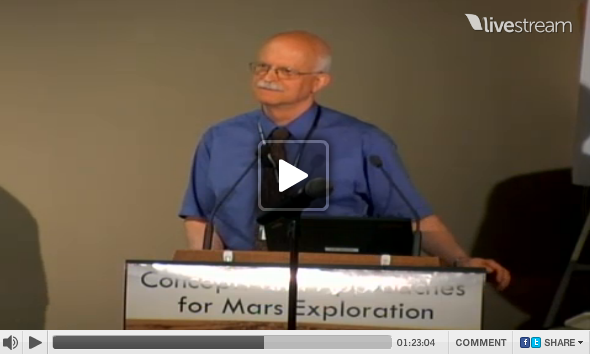 Zubrin (as questioner in audience at about 1:22): “The purpose of the human, exploration program, inasmuch as it is cooperating with the robotics, exploration program, should be to prepare for human exploration not to prevent human exploration…and so…you really don’t want to get into this thing of “you can’t do your program, until we do my program”. And so that, for example, while the Mars Sample Return has a great deal of scientific merit – I’m not going to argue against the mission – ah…to say you cannot do a human mission, until you’ve done a sample return mission, to certify that the target site is lifeless, ah…doesn’t make any sense. In fact, if you did do a sample return mission and you found biological material at that site, that’s exactly where you’d want to send human explorations. You want to send human explorers to the most interesting sites, not to the least interesting sites. And, other things here…we clearly don’t need to do a Phobos mission before we do humans missions. You might want to do a Phobos mission, but to claim you have to do a Phobos mission before you do humans missions, its not relevant. To say you have to do a humans to Mars orbit before you do human mission to the Mars surface, makes no sense, because actually, a human mission to Mars orbit, unless you have very advanced propulsion systems which can take on very large delta Vs, will involve over twice the radiation dose of a human mission to the Mars surface, because you’re left in Mars orbit for a year taking in-space radiation doses. So, I think what you want to do, is – for instance: Mars missions that provide reconnaissance for the most interesting sites to target human exploration to? Great! Okay…the, the Mars missions which do reconnaissance to assure us of no landing hazards, great. Mars missions that find resources that would be useful to human missions, great. Okay, and we should do the maximum number of them – but, the idea of doing, of, of, of setting an infinite series of precursors and saying “you can’t do that until you do all these things” – many of which are clearly irrelevant and are just being stuck in there because somebody’s interested in them, that’s not the way to go.”