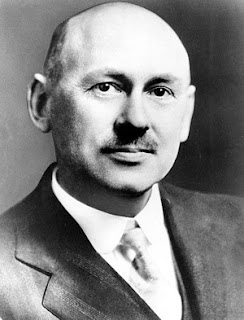 Sealed in an envelope on the outside of which he wrote: “The Last Migration. The notes should be read thoroughly only by an optimist!”.  Goddard was 35 years old and the notes were written more than six years before he would conduct the world’s first rocket flight using liquid propellants.

He wrote a condensed version and titled it The Ultimate Migration, which we are delighted to reproduce here in full and in the form in which it was written, uncorrected for grammar:

1 Possibility
Will it be possible to travel to the planets which are around the fixed stars, when the Sun and the Earth have cooled to such an extent that life is no longer possible on the Earth?

To answer this question, it is necessary to answer two others; first, will it be possible to unlock, and control, intra-atomic energy? and second, if the first cannot be answered in the affirmative, will it be possible to reduce the protoplasm in the human body to the granular state, so that it can withstand the intense cold of interstellar space? It would probably be necessary to dessicate the body, more or less, before this state could be produced. Awakening may have to be done very slowly. It might be necessary to have people evolve, through a number of generations, for this purpose.

2 Means of Transportation
If it is possible to unlock, and to control, intra-atomic energy, or even to store up great quantities of energy in artificial atoms, the transportation can be a comparatively simple matter.

In the first place, it would be easy to attain the requisite speed for a reasonably short trip. Further, a large body could be used as the vehicle, such as an asteroid or a small moon. In this case life could be continued, if the body were made as poor a (heat) radiator as possible; the radioactivity furnishing light and heat. Of course, there is the possibility that after many thousands of years, the characteristics and natures of the passengers might change, with the succeeding generations.

A large body would also afford protection against meteors, if these occur in interstellar space.
If it is not possible to obtain and control atomic energy, hydrogen and oxygen, burned and ejected from a magazine rocket apparatus must be used, aided by solar energy, to get up speed, and leaving the Solar System with such a velocity that, at a great distance from the Solar System, the speed will be 3 to 10 miles per second. This will, of course, necessitate a very large apparatus, initially, unless solar energy can be used over a considerable time, to get up speed, either by passing through the Solar System from end to end, crossing as far from the Sun as possible, or spiralling outward until sufficient speed has been obtained.

The pilot should be awakened, or animated, at intervals, perhaps of 10,000 years for a passage to the nearest stars, and 1,000,000 years for great distances, or for other stellar systems. To accomplish this, a clock operated by a change in weight (rather than by electric charges, which produce too rapid effects) of a radiation substance, should be used. Any substance for us as a spring should be tested for permanent set at low temperatures. It might be necessary to use the pressure of the gases generated by the radioactivity. This would amount to a radium alarm clock. The initial motions produced by the pilot should be controlled by small motions of the fingers. Energy for the various operations could probably be best stored as electric charges produced, and replenished, by radioactivity, rather than, say by super-conductors, or by chemical substances that might change with time. Probably most chemical substances would remain very inert at the low temperature of space. This awakening would, of course, be necessary in order to steer the apparatus, if it became off its course.

3 Where would the journey be made to?
The most desirable destination would be near a large sun or twin suns, on a planet like the Earth, but of course, more distant from the sun or suns, so that the temperature will not be high, the planet being in the early stage of development. Here, further development of the race could take place for many ages before the sun or suns became too cool to support life.

The destination should be in a part of the sky where the stars are thickly clustered, so that further migration would be easy; the stars being preferably hydrogen, or new, stars.

Because of possible danger from meteoritic matter in space, expeditions should be sent to all parts of the Milky Way where new stars are thickly clustered, so that there will be considerable chance of one or more expeditions or parties making a landing.

With each expedition there should be taken all the knowledge, literature, art (in a condensed form), and description of tools, appliances, and processes, in as condensed, light, and indestructible a form as possible, so that a new civilisation could begin where the old ended.

4 Is this to be expected?
The only barrier to human development, or advancement, is ignorance, and this is not insurmountable.

If the above is not possible, or desirable, granular protoplasm, suitably enclosed, might be sent out of the Solar System; this protoplasm being of such a nature as to produce human beings eventually, by evolution.