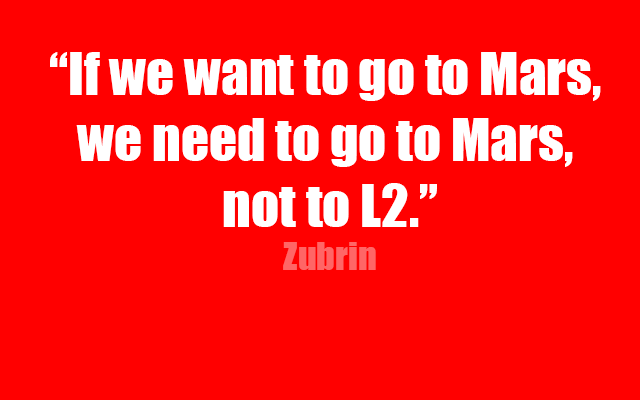 “Mars the Hard Way”
By Robert Zubrin | Dec. 3, 2012In recent weeks, NASA has put forth two remarkable new plans for its proposed next major initiatives. Both bear careful examination.

The other initiative is a new plan for Mars sample return, which is now held to be the primary mission of the robotic Mars exploration program. This plan is remarkable for its unprecedented and utterly unnecessary complexity.

It may well be asked whether a sample return is the best way to pursue the robotic scientific exploration of Mars, within the budget of the Mars exploration program run by NASA’s planetary exploration directorate. That is an issue over which reasonable people may, and do, differ. It is certainly possible to propose alternative robotic mission sets consisting of assortments of orbiters, rovers, aircraft, surface networks, etc., that might produce a greater science return than the Mars sample return mission, much sooner, especially in view of the fact that human explorers could return hundreds of times the amount of samples, selected far more wisely, from thousands of times the candidate rocks, than a sample return mission. However, that said, if members of the scientific community really believe that a robotic Mars sample return is so valuable that it is worth sacrificing all the other kinds of science they could do with their cash, then it is imperative that NASA develop the most efficient Mars sample return plan, to allow the sample to be obtained as quickly as possible and with the least possible expenditure of funds that could be used for other types of Mars exploration missions.

The kindest thing that can be said about this quintuple rendezvous plan is that it is probably the unplanned product of the pathology of bureaucracy, rather than the willful madness of any individual. For a fifth of its cost, NASA could fly five simple direct sample return missions, each of which would have (at least) five times its chance of mission success. So it’s hard to imagine any sane person inventing it on purpose.

Clearly, though, the group that drifted into it was attempting to make the Mars sample return mission provide an apparent excuse for the existence for an assortment of other NASA hobbyhorses. For example, we note that it makes use of the LaGrange point space station. But this does not help the Mars sample return mission, which could much more simply just return the samples to Earth, where far better lab facilities are available than could ever be installed at L2. Rather, by invoking the L2 station as a critical element of the mission plan, NASA is inserting a toll both blocking the way to the accomplishment of the sample return, while radically increasing mission and program cost, schedule and risk and decreasing science return. The same can be said for requiring the use of electric propulsion, a technology program that was inserted into the human Mars mission critical path based on an unsupportable claim by a well-placed advocate that it could speed up interplanetary transits, and that now needs some alternative rationale.

This planning methodology is equivalent to that of a shopaholic couple who ask an architect to design their dream house but insist that he include in his design as critical components every whimsical piece of random junk they have ever bought in the past and piled up in their back yard, in order to make those purchases appear rational after the fact. By capitulating to this kind of thinking, the NASA leadership has transformed Mars sample return from a mission into a “vision.”

NASA is facing an oncoming fiscal tsunami. There could never be a worse time for the agency to seek to inflate the cost, stretch the schedule and minimize the return of its missions. If the space program is to survive, it needs to really deliver the goods. Now, more than ever, if we actually want to get a sample from Mars, we need to employ a plan that does that in the simplest, cheapest, fastest and most direct fashion possible. Under no circumstances should the mission be made into a Christmas tree on which to hang all the ornaments in the bureaucracy’s narcissistic wish box of useless and costly multidecade delays. And the same can be said of the human Mars exploration mission as well. If we want to go to Mars, we need to go to Mars, not to L2.