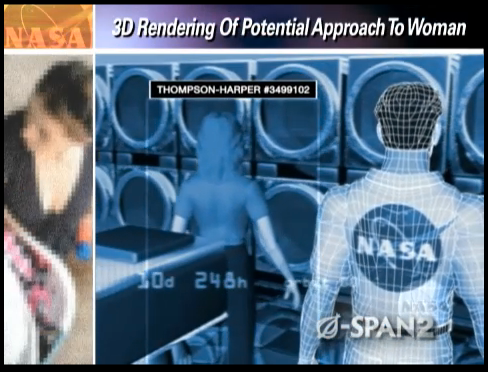 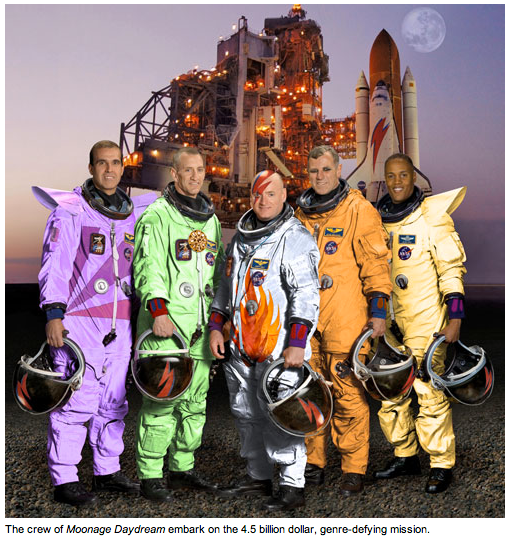 “These new suits are veneered with a protective silver lamé to complement the multicolored lightning bolts emblazoned across the helmets’ sun visors. They’ve also been updated with several improved components to ensure the team is completely safe when it’s time to leave the capsule—if they dare.”
http://www.theonion.com/content/news/nasa_launches_david_bowie_concept
NASA Is An Industrial Subsidy In Disguise
I grew up with the romantic notion that NASA is not merely a government agency, but an organization dedicated to bravely propelling the human race forward into a glorious future of scientific advancement and discovery […but…] NASA exists largely to provide an economic boost to the American aerospace industry, particularly Boeing. NASA gets away with this thinly veiled pork-barrel politicking, the piece contended, by distracting the public with “bread-and-circus” space missions that emphasize thrills over genuinely useful scientific discovery.>
Consider the hoopla surrounding John Glenn’s return flight to space. He got a ticker-tape parade and front-page coverage, but what did science actually gain? …it’s time we started making NASA accountable for its wasteful, PR-driven expenditures.
http://www.theonion.com/content/node/34138
NASA Baffled by Failure of Straw Shuttle
$68 billion straw space shuttle [… ] “It was nice and crisp and dry,” Toshikima said. “Which is the best condition for straw headed away from the earth’s gravitational pull.” The Explorer 2, like its predecessor, was headed for the sun, where it was to be the first spacecraft to land on a star. “We’d hoped to bring back and study sun rock,” Toshikima said.”
http://www.theonion.com/content/node/50100
NASA Announces Plan to Bring Wi-Fi to Its Headquarters by 2017
An ambitious mission to make Houston’s Johnson Space Center wireless-Internet capable within one decade. We are not content to rest on our laurels. It may seem like an impossible task, but if we commit all of our focus, technology, and resources, we can get Wi-Fi into NASA’s offices and research labs within our generation.”  Griffin was confident that NASA’s estimated $655 million plan to install a wireless broadband router by 2017 could reap huge benefits for the entire space agency.
NASA has suffered from a public credibility crisis in recent years due to perceived incompetence, a failed mission to Mars, the damaged and dormant Hubble telescope, and its inability to procure a long enough USB cable to reach all the way over to engineer William Chen’s cubicle. But NASA officials argue that a secure high-speed line could prevent disasters such as a 2005 incident in which an employee attempting to download the movie trailer forCheaper by the Dozen 2  crashed the Mission Control Center mainframe computer for two weeks.
http://www.theonion.com/content/news/nasa_announces_plan_to_bring_wi_fi
NASA Embarks on Epic Delay
The unprecedented delay has reportedly brought together the nation’s foremost aerospace engineers, whose combined efforts have already added 18 months of rescheduled meetings to the daring mission. “Delays of this magnitude were once the stuff of science fiction,” Scolese told reporters during a noon press conference Monday that actually started around 3:15 p.m. “But now, thanks to a number of long-overdue technological advances, this historic delay will stretch the very limits of what humankind can push back indefinitely.”
“Never before has man dared to fall behind on such a sweeping scale,” said Brenda Win, head administrator of the newly established delay-management team, which is expected to be named sometime next month or maybe the month after. “A postponement like this only happens once in a lifetime. This will be the series of setbacks you’ll tell your grandchildren about.”

“When we have finally finished here, the universe will see there is no end to what man can entangle in red tape,” Scolese wrote in the stirring statement. “Even as we speak, our top people are dragging their feet on what will become the longest and most profound delay in the planet’s history.”

People Living On The Moon
“Golden throne so tourists can have their pictures taken as the Moon King.”
http://www.theonion.com/content/infograph/people_living_on_the_moon
Scientists Ask Congress To Fund $50 Billion Science Thing
I have always said that science is more important than it is unimportant,” Committee chairman Rep. Bart Gordon (D-TN) said. “And it’s essential we stay ahead of China, Japan, and Germany in science. We are ahead in space, with the NASA rockets going to other planets, so we should be ahead in science too.”
“Now, I’m no science major, but if I’m being told by a group of people that the protons, neutrons, and electrons need unifying, then I think we owe it to the American people to go in and unify them,” Rep. Mark Udall (D-CO) said. “After all, isn’t a message of unity what we want to send to our children?”
http://www.theonion.com/content/news/scientists_ask_congress_to_fund_50
Conspiracy Theorist Convinces Neil Armstrong Moon Landing Was Faked
According to Armstrong, he was forced to reconsider every single detail of the monumental journey after watching a few persuasive YouTube videos, and reading several blog posts on conspiracy theorist Ralph Coleman’s website, OmissionControl.org.  “This is all just common sense, people,” he added. “It’s the moon. You can’t land on the moon.”
http://www.theonion.com/content/news/conspiracy_theorist_convinces_neil
NASA Announces Plan To Launch $700 Million Into Space
fficials at the Kennedy Space Center announced Tuesday that they have set Aug. 6 as the date for launching $700 million from the Denarius IVspacecraft, the largest and most expensive mission to date in NASA’s unmanned monetary-ejection program. “This is an exciting opportunity to study the effect of a hard-vacuum, zero-gravity environment on $50 and $100 bills,” said NASA Administrator Michael Griffin, who noted that prior Project Denarius missions only studied space’s effect on fives and singles.
http://www.theonion.com/content/node/47977